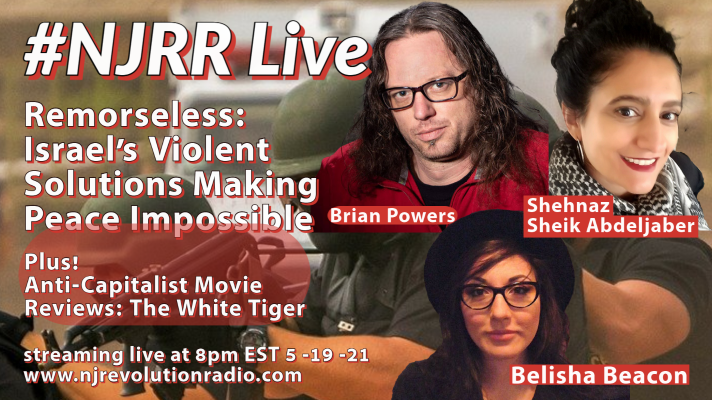 Hello and thank you for joining us today. This is #NJRR Live, coming to you every Wednesday at 8:00PM EST.  Before we get into tonight’s main topic, we begin with a tribute to Malcolm X and a movie review.

Malcolm X would have been 96 on the night of this show’s taping. A lot of people misunderstand Malcolm X because of what they are told about him. The media tends to frame Malcolm X as a raving anti-whiteness lunatic, but the truth is, he was a charismatic man with incredible values. He bravely stood for liberation and fought for truth.

Brian welcomes Belisha Beacon, an Editorial Board member and familiar comrade, to the show. Belisha comes onto #NJRR Live every month to do a movie review. The White Tiger is a Netflix exclusive film that was nominated for an Oscar for Best Adapted Screenplay this year. It is based on the New York Times novel by the same name.

The White Tiger is a satire film with anti-capitalist leanings. It examines the caste system of India through the perspective of a young, impoverished boy who connives and manipulates his way up social ranks. Belisha believes that this main character is meant to serve as a representation of how the prevailing social system in itself is the defining cause of society’s collective suffering. Brian and Belisha rank this film relatively highly, agreeing that it is one of the best movies that has been discussed on #NJRR Live so far.

We’ll see you at our live show at The Coffeehouse in Edison, NJ on June 22! It’s going to be a great time.

Our main guest tonight is Shehnaz Abdeljaber. Shehnaz is a Palestinian who has close ties to people living in the country. This past week has been especially harrowing for Palestinians as Israel has been escalating its violence against them. Shehnaz is concerned with how people in the Western world view those who are struggling in the East. The mainstream media portrays Palestinians as monsters and terrorists; less than human. Dehumanization is a step on the path to genocide because in order to erase something, people generally prefer to see it as being lesser or inferior somehow.

Shehnaz has been in touch with family of hers that lives in Palestine. She reports hearing disturbing background noise on phone calls and shares that she cannot imagine how it would be to have to live in an environment like that. It is tragically commonplace now that Palestinians fear for their lives and the lives of their children.

In recent attacks by Israel against Gaza, there’s something different about the weaponry they’ve been using.”Some of it is silent before it reaches you,” tells Shehnaz. Palestinians have been saying this for decades: The United States gives Israel new weapons to test on Palestinians. This is not some nutty conspiracy theory. This is something that every human being on Earth should care about.

Palestine is a country with inhabitants of mixed race and ethnicity. Palestine has never truly been free. “We’ve always been under somebody’s rule and thumb,” Shehnaz tells us. The creation of Israel involved massacres that have been covered up. A narrative persists that the current Israel was an empty land for a chosen people: this is a lie. The land was not empty. Palestinians lived there and they have been being oppressed for decades. Palestinians are sick and tired of being ignored, being abused, being abandoned by the world. Shehnaz laments that there have been over 70 years of settler colonialism in her family’s country.

Social media has had its impact on this crisis. The internet has put power in the hands of Palestininans. There has been censorship, but it is too late. The Israeli government cannot shut the movement down at this point. This is full-blown genocide. Shehnaz wonders, what are people around the world so afraid of? She likens world leaders to children on the schoolyard, afraid of a bully. Now, regular people are finally catching on to the bullshit.

The Hopes of Palestinians

Human beings have the right to live in peace. To Palestinians, what does peace look like? What do they want the world to know? Shehnaz prepared for tonight’s interview by talking to Palestinians living in their country. This is an answer, relayed by Shehnaz, from a 17 year old girl in Gaza who is living and breathing this issue every day:

How Can I Help?

What can you do to help right now if you are able? Write to your Congressman. Get on the streets. (Facebook groups like this one are perfect for finding information about these efforts.) Confront people with the truth. Get on social media and spread the word. You have more power than you think. Shehnaz mentions the Palestine Children’s Relief Fund, the United Palestian Appeal, United Nations Relief and Works Agency, and Palestine Legal as organizations in need of support. Students are especially vital to the movement. Israel tries to shut down and terrorize local/on-campus movements. It is beyond crucial that this story continues to spread. Countless human lives depend on it.